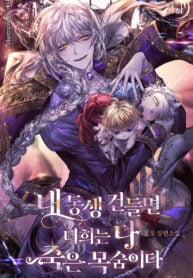 I became sixteen year old Rosalette. She fell out of bed and when she opened her eyes, she had possessed a character in “Asterion of a Blue Starry Night” a cliche BL novel with passion, fantasy, drama, and angst. Plus, she was Rosalette, the older sister of Asteron. Asteron was the protagonist and the one who committed suicide at the end of the novel. She left herself to go through the flow of events in the story. At the end of that, she went back in time to become sixteen year old Rosalette again. She thought that standing by was what she did wrong, so she raised her younger sibling finely, but she died from an outside force and returned as Rosalette once more. She changed her direction. She indulged in training herself instead of her brother. That didn’t seem to work either. She had learned magic but still returned, and she had lived all the way till her graduation, but still returned. Rosalette Roxburgh who is always returning to her sixteen year old self, is still looking for a way to die indefinitely.

We provide a lot of manhwa for you to read manhwa when you need to relax after an entire day with your work.

If You Touch My Brother, You’re All Dead webtoon is out now on the site now!